Since childhood I have had a huge interest in the Long Range Desert Group (LRDG), an Allied Special Forces unit that was formed in Cairo in 1941, forerunner of the SAS.

The Long Range Desert Group was the creation of British soldier, explorer and scientist Ralph Bagnold, a Royal Engineers officer who had, with his expat friends, explored the deserts of Egypt during the 1930s. As the war against Italy and later Germany intensified in then-British Egypt, Bagnold highlighted the need for a long-range reconnaissance and raiding unit using motorized transport – “piracy on the high desert” as he called it. The LRDG lived in the deep desert for long periods – months at a time, quietly watching Axis vehicle movements and carrying out hit-and-run raids, often on supply lines and airfields. Hugely successful and influential, they led to the creation of the Special Air Service, a unit whose success is well-known, and a unit that absorbed the LRDG towards the end of the war.

Over the years I’ve been lucky enough to accumulate various books and artefacts from the LRDG – these are photographs of some of them.

Ten-inch knife (or letter opener) with an ivory blade, and handle made from paw of a fox (possibly a fennec), the two being joined by a silver plated brass crossguard.

Inscribed “Presented by Long Range Desert Group – Capt H J Bennett Cairo 1944”
Bought from a guy from Kitchener, Ontario, Canada. The seller bought the knife from a lady who had it from the estate of her aunt in Kitchener. The knife belonged to her uncle, who was H J Bennett – nationality unknown.

Seller thinks Bennett was possibly a pilot. Preliminary research lists three H J Bennetts who served in the war, two NZ pilots and one UK sailor, none of whom are Captains – two are pilots (New Zealand Sergeant and Fg Off) and one of whom is a Surgeon-Commander.

The LRDG were deployed in the Aegean and Italy in 1944, so one of their number must have travelled to Cairo to present this to Capt Bennett ……

A Yorkshire antique expert has examined it and says it’s genuine as far as date and material of construction goes…. 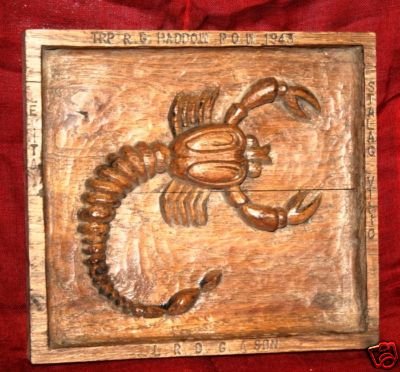 This is a ten inch-square plaque made from an oak plank from a bed in a Nazi prisoner of war camp. It was carved by Trooper R G Haddow of A Sqn, LRDG from an oak bed plank in Stalag VIIIC (next to the infamous Stalag Luft III) in what is now Poland. Haddow was severely wounded in the stomach by machine gun fire in the attack on Levita, an island in the Aegean, and went “in the bag”, being taken to Stalag VIIIC (near Żagań, Poland) after his recovery. I bought it in Spring 2009 from a collector in Louth. 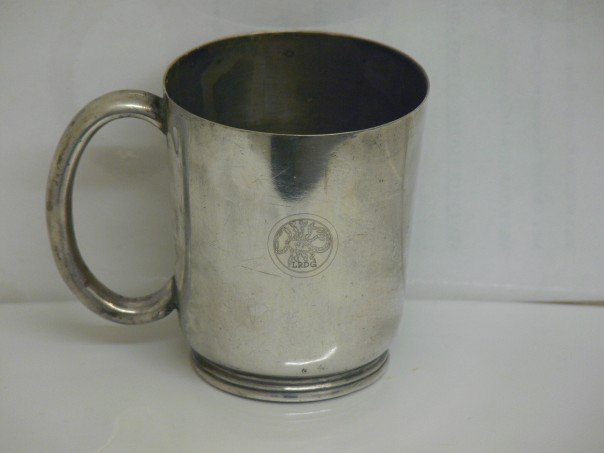 Silver half-pint tankard with LRDG crest – originally from Cecil Hotel in Alexandria, kept for celebratory toasts in the bar that was used by the LRDG as an Officer’s Mess at the time of the battle of El Alamein. After the war it was kept on display behind the bar until the revolution in 1953 when it was brought back to the UK by an SIS agent, from whose estate I bought it. 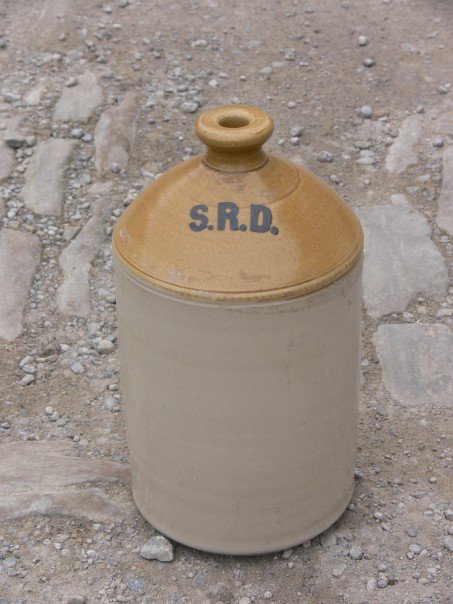 LRDG gallon Rum Jar, found by me in Siwa oasis in 2001. I bought it from a stallholder in the village marketplace. Issued to LRDG patrols and supposed (!) to last a 12-week patrol – SRD stands for Supply Reserve Depot, but LRDG thirst being what it was, the joke was that it really stood for Seldom Reaches Destination. Still smelt of rum when I found it. It would have been filled with Royal Navy issue rum, today sold as “Pusser’s Rum”.

This “Homa Senator” briefcase belonged to Captain Tony Browne DCM MC, initially of T Patrol LRDG and later navigation instructor and then Intelligence Officer for the LRDG. It has a handwritten label with the key for the detachable document wallet that reads “Despatch case zipper” – suggesting that either the briefcase or the wallet was used for despatches, – this was a military item rather than something Tony had when he went into civilian life. The document wallet is very worn, with ripped and ragged lining, the briefcase very much less so – almost pristine. The briefcase has never been used to hold bulky items.
The fact that it is in good order suggests that it was used when Tony was LRDG Intelligence Officer in the Aegean theatre rather than in a combat environment. I am guessing, then, that this case was used by Tony to keep intelligence information prior to distributing it at briefings before LRDG raids.
Tony died in 1970. His widow gave the case to Maj-General David Lloyd-Owen, CO of the LRDG, who gave it to Ron Penhall, a Canadian medal collector, in 1995. I bought in from a collector in Essex (who had it from Penhall) in November 2010.
Tony Browne’s medals and diary sold at auction for £18,000 about 5 years ago. Below is a letter from David Lloyd Owen confirming it was Tony’s briefcase. 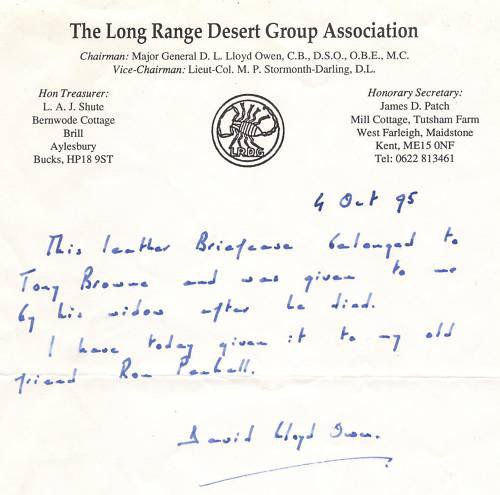 In April 2012 I went back to Siwa oasis and to my amazement found a genuine late-pattern 1942 LRDG sand ladder acting as a counterweight on a shop frontage. I was lucky enough to buy it. Karl-Gunnar, a friend I was travelling with, saw it seconds before I did, so the find was his in all fairness, but he kindly said I could have it. Tack sa mycket Karl! This one might be LRDG – or it might not. Siwa was used by LRDG and SAS during the war and all sorts of British units in the 1950s. However I did find another in the desert west of the Gilf Kebir which is definitely LRDG. 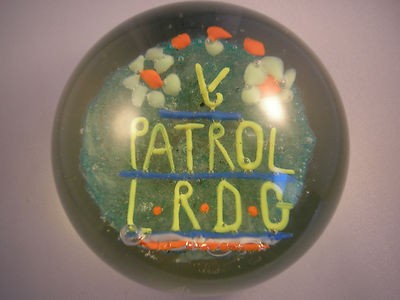 I have two paperweights made as commemorative items after the war – one for Y patrol (this one) and one for T patrol. It seems they were made by glassblowers at Pilkington Glass in the UK who wanted to make a bit of extra cash when they came off shift! 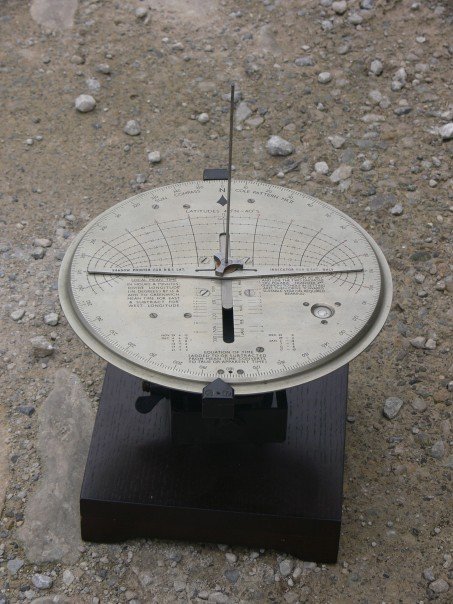 1941 LRDG Coles Mk II sun compass. Now on display base but originally would be on dashboard of LRDG jeeps and trucks – magnetic compasses are inaccurate close to steel-bodied vehicles, and in the featureless desert one cannot always navigate by terrain features (there arent any), so a sun compass (in the days before GPS) was often the only way. This may not be an actual LRDG compass as it was used by some (not many) other units at the time, like the SAS.

I’m lucky enough to own several signed and/or annotated copies of LRDG books. Some have been signed by authors or other members of the LRDG, others have been annotated by those present at the events described. In some copies (like this one, a copy of “Long Range Desert Group” by Bill Kennedy Shaw) it’s evident that the annotator was very familiar with events and places – “On 4/1/42 was put down by plane at LG72 and guided “Shorty” to FSD29 where located LRDG mail. “Shorty” drove me on through Msheifa to Thalata – LBS”. Sadly LBS has not signed the book fully elsewhere, though other annotations exist within, in the same handwriting. So who was he?

Another copy of the same book is even more cryptic. This too has annotations, in a different hand, but this time they verge on the unreadable! Again, the writer seems to have been present at events described. He seems to be a previous owner of the book (the signature on the flyleaf is similarly written) and this is dated 1946, a year after the book’s publication.

In some ways it’s frustrating to try and work out who wrote the comments, but it’s also an interesting piece of detective work – comparing existing specimens of handwriting from known LRDG members, asking relatives of LRDG members if they recognise the script (Meg Kennedy Shaw, Bill Kennedy Shaw’s daughter, has been very helpful), trying to decipher the handwriting and find each example of it in the books (some passages have been underlined with margin notes) – the list goes on. Trying to piece together these puzzles is a great activity on a winter morning in England when one is dreaming of the desert…. 🙂

Signed copies and annotated versions of the LRDG memoirs seem to bring the soldiers, explorers and adventurers who made up the unit closer somehow, almost like the photographed characters in Robin Williams’ “Dead Poets Society” who whisper ‘Carpe Diem’ if you listen to their portraits….