“Welcome my son, welcome to The Machine” 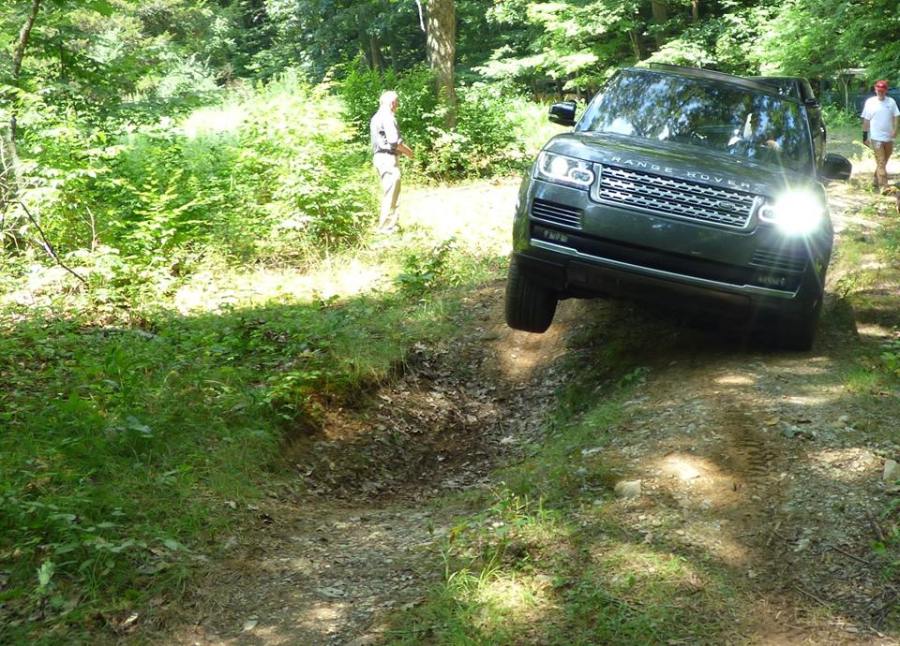 After the failure of my Transamerica trip I was a bit at a loose end as regards transport. Penny the Land Rover languishes in despond in a garage in Decorah, Iowa, and I’m back in Virginia. Enter Land Rover North America, who very kindly lent me a car.

Not just any car. A Car. Their top of the tree. The 2016 Range Rover LWB. This modest title plays down the Beast’s attributes. A 5 litre supercharged V8 harnessing 550 horses whispers away silently (only seldom does the Range Rover deign to emit a sound as coarse as a growl) under the capacious bonnet of this Grand Tourer – stretched by 20cm in the rear passenger compartment to give more legroom than in First Class on an airliner. The Corus Grey bodywork is understated, with only a small ‘Supercharged’ badge and an ‘L’ to denote the extra length of the leviathan.

This is a majestic car. There’s no other word for it. It took me seven and a half hours to drive from Virginia to Connecticut and nine to drive back – but in the Range Rover it was as if I was cocooned in a wafting cloud. This is no hyperbole. The engine is seldom even audible – unless, that is, you boot it. There’s the usual automatic transmission kickdown and surge, but there’s a further ‘gate’ further down in the throttle that births a noise like continental drift under the bonnet – and the supercharged V8 wakes up with a ferocious roar. Acceleration, when needed, is fierce. 0-60 is a shade over 5 seconds – faster than most sports cars. Several clowns tried to mess with the Rangey on the freeway, and were left staring when she made her supremacy clear in a manner not unlike Daniel Craig’s James Bond nonchalantly shooting his cuffs when he dropped through the roof of the train in Skyfall.

I took her offroad. I wasn’t going to, but after all this is a Range Rover – it has the green (ok black in this case, as she is supercharged) oval of Land Rover on the nose, and that means it can go pretty much anywhere. The ability of the truck was staggering. I took a supercharged version of the previous Range Rover, the L322, offroad about eight years ago in the hills of North Yorkshire and it kept up with my Defender over some pretty hairy terrain, but this Grey Lady would surpass most Defenders. Front and rear automatically-locking differentials, intelligently controlled by the car itself, Land Rover’s Terrain Response system and Hill Descent, plus the handy ability to lift herself up so that there’s about a foot of ground clearance offroad. Superb.

Friends I had in the car were amazed – and rightly so. Here is a car that will move as fast as a sports car, keep up with a Defender offroad, and is as well-appointed and luxurious as a Bentley. The Times called the Range Rover ‘the perfect car for the English gentleman’. However the best quote to describe the Range Rover LWB is from Queen Elizabeth I;

“Fear not – we are of the nature of the lion”