In October I was lucky enough to visit Lebanon again – one of my favourite places in the world. For me, it combines the best parts of the Middle East and Mediterranean Europe, a land rich with history and culture (it is, after all, ancient Phoenicia) and with a progressive, friendly and welcoming population. This time I was able to catch up with old friend Patrick Adaimi also make new friends amongst the Land Rover Discovery Club of the Lebanon, led by Fawzi Farah.
Patrick and I share an interest in many areas of history – not least of which the Long Range Desert Group, that pioneering mix of explorers, adventurers and soldiers whose personal stemmed from the UK, New Zealand and Rhodesia, amongst others, and who revolutionised desert warfare in the first part of the Second World War. Hoisted by their own petard however they were subsequently deployed in a campaign that was outside their expertise; the Aegean Campaign in 1943, where they were underequipped and poorly prepared. To train for this they were sent to the British Army Ski School which was in the mountains of northern Lebanon.
Patrick and I set out to find it – if there was anything left of it!

The Ski School was originally in the Grand Hotel Des Cedres, at the famous Cedars of Lebanon forest near the village of Bcharre. By a quirk of fate, it had been owned by Patrick’s wife’s family during the 1940s! 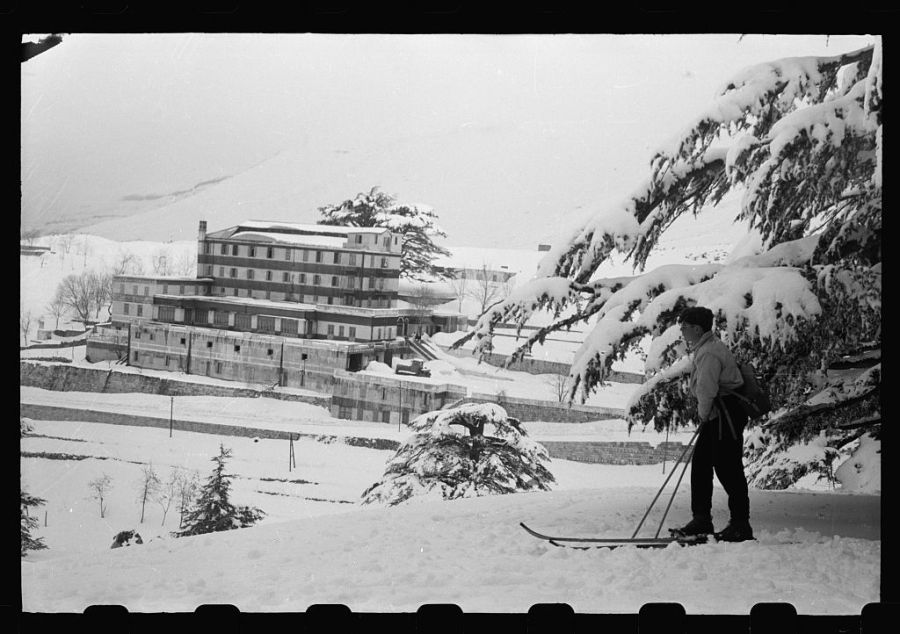 Sadly in the late 1960s the national government decreed that there should be no commercial activities within the precincts of the Forest, so the hotel was demolished. But Patrick had been doing a lot of research, and as part of his project to compile a list of “before and after” photos of WW2 Lebanon, he had located the site. This was our chance to go and see it. So we set off in Patrick’s Defender.

Our road took us from Jounieh, north of Beirut, through twisty roads to Bchaaleh, a lovely village in the northern mountains where I’d visited five years ago with Rawad Rizk, another good friend from Lebanon (and also a Defender owner!). In Bchaaleh we stopped briefly at the oldest olive trees in the world – the Sisters of Bchaaleh. Sources vary but they seem to be between 3000 and 6000 years old. 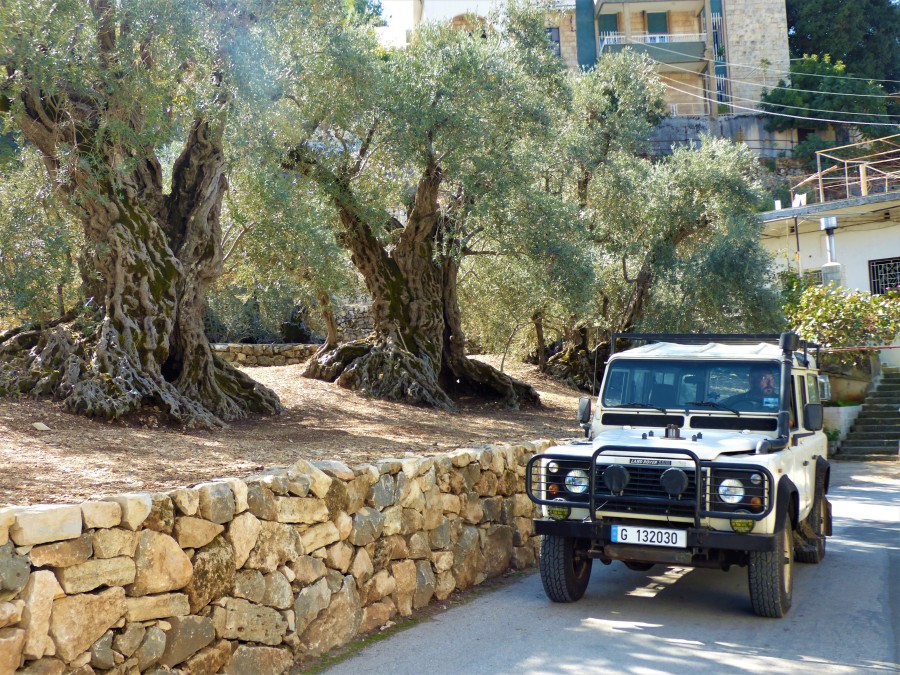 From Bchaaleh we drove higher and further into the mountains, and as the weather started to deteriorate, and freezing fog came in, we passed through the alpine village of Bcharre and reached the Cedars of Lebanon. 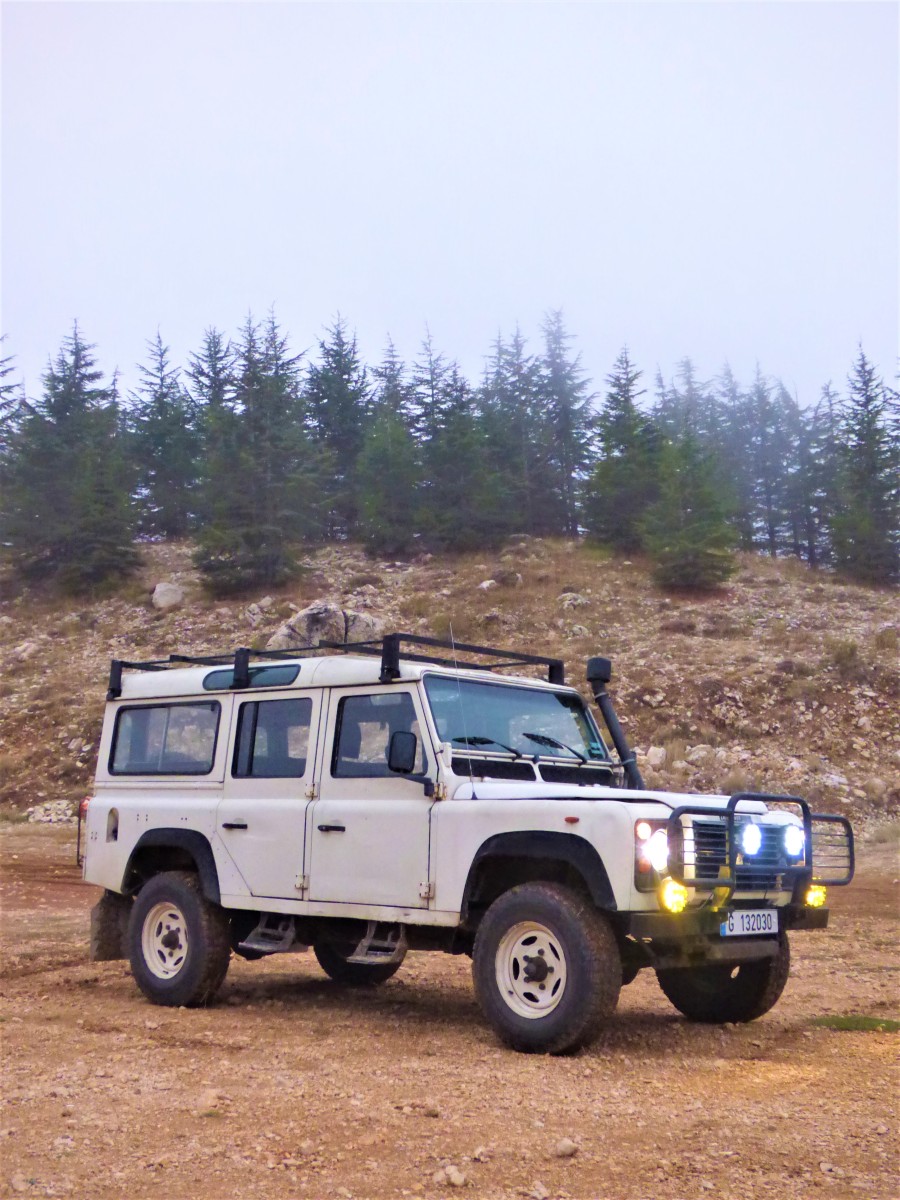 We found the site of the hotel/ski school – it had been demolished in the 1960s, but we found it, hidden behind a patch of waste land. We walked through what had been the buildings and amongst what had been once the ornamental gardens. We even found the remains of the terrace where LRDG and SAS officers would have partied – and walked on the same tiles – they survived in some areas.

And yet now it’s all gone – even the locals aren’t aware of it very much – and certainly not of the pivotal role it played in the history of Special Warfare.

The time came to return to Beirut, and before I headed out with Fawzi and the Discovery Club I took part in a bit of history. Lebanon is, at the time of writing, undergoing upheaval and revolution. The existing government is seen by many as corrupt and self-serving, and a large chunk of the population have decided this isn’t satisfactory. It’s not my intent here to pass judgement on the political situation (I know many Lebanese read this – including several of my friends) – and god knows, as a Brit right now I am not entitled to have any political opinions until we set our own house in order! I did however take part in the anti-government protests and tried to chat to as many folk as possible in Martyrs’ Square and understand as clearly as I could what is going on, and what’s at stake.

Then it was up into the mountains again, near the ski resort of Faraya with the Discovery Club of Lebanon.

More later when I get chance 🙂